The Sanctuary Summit 2014 was an unprecedented gathering of refugees, migrants, advocates and supporters from more than 100 civil society organisations across Britain who voted unanimously to work to stop the tide of negativity facing those who come to our shores. 400 participants at the first ever national ‘Sanctuary Summit’ declared they could no longer watch in silence as thousands are left to drown while fleeing for their lives, and others find themselves warehoused in refugee camps, barred from travelling to safety in the West.

On the day (Saturday 15th November) that the England football squad included its first refugee player, the Summit, taking place in Saido Berahino’s new home city of Birmingham, launched what organisers described as ‘a powerful movement for positive change’ in the national dialogue on immigration.
“Let’s reclaim the centre ground of political debate with empathy, compassion and common sense,” urged Refugee Council Chief Executive Maurice Wren. “Working together we’ll drive those who denigrate and demonise migrants to the extremes where they belong.”

After hearing a message of support from the Archbishop of York, the Summit went on to commit itself to forming a broad alliance to protect those to whom the Right Reverend John Sentamu referred as being among the most vulnerable in society. One of the highlights of the event was the appearance of the so-called ‘Glasgow Girls’, former school students who campaigned for the rights of friends who had fled persecution to be granted refuge in Britain.

The Summit was organised by national and local organisations working with migrants and refugees, and chaired by two refugees, Zrinka Bralo and Forward Maisokwadzo – former journalists from Bosnia and Zimbabwe who now campaign for the rights of migrants and refugees. Participants spelled out their position in the “Birmingham Declaration”, a set of principles and ‘asks’ that have already been signed by 26 national and regional organisations. The declaration affirms Britain’s long tradition of offering protection to those fleeing persecution, and its reputation for fairness and justice. It goes on to say that most British people are sympathetic towards those who come here seeking protection, and asks for an end to destitution and indefinite detention. It is planned to carry on gathering support for the Declaration across the faith, community, public and private sectors, before sending it to all party leaders. 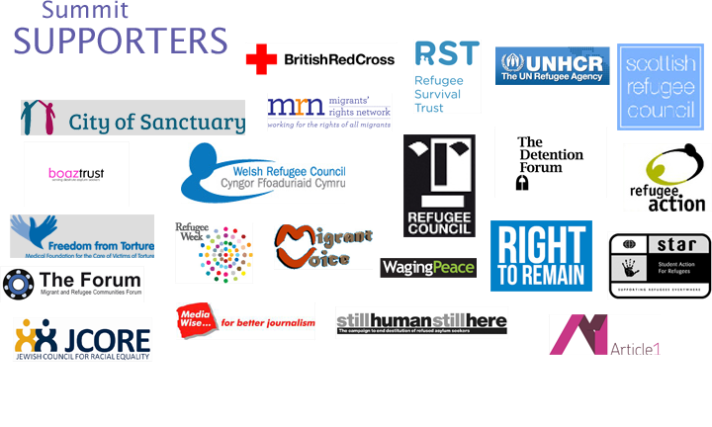